What is multiple pregnancy?

A multiple pregnancy is a pregnancy with 2 or more babies. Some names for these are:

Multiples make up only about 3 in 100 births, but the multiple birth rate is rising. According to the National Center for Health Statistics, the twin birth rate has risen 70% since 1980. It is now 32.6 per 1,000 live births. The birth rate for triplets and other higher-order multiples rose dramatically. But it has slowed since 1998.

Many factors are linked to having a multiple pregnancy. Naturally occurring factors are:

Other factors that have greatly raised the multiple birth rate in recent years are reproductive technologies such as:

How does multiple pregnancy happen? 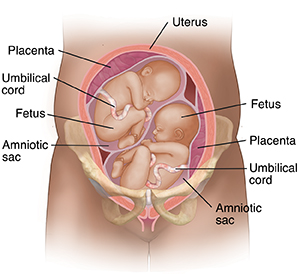 Sometimes 1 egg is fertilized and then splits into 2 or more embryos. This is called identical twinning. It makes all boys, or all girls. Identical multiples are genetically the same. They often look so much alike that even parents have a hard time telling them apart. But these children have different personalities and are distinct people. Identical multiples may have individual placentas and amniotic sacs. Most share a placenta with separate sacs. Rarely, identical twins share 1 placenta and a single amniotic sac.