Anatomy of the Breasts

Each breast has 15 to 20 sections, called lobes. They are arranged like the petals of a daisy.

Each lobe has many smaller structures called lobules. These end in dozens of tiny bulbs that can make milk.

The lobes, lobules, and bulbs are all linked by thin tubes called ducts.

These ducts lead to the nipple in the center of a dark area of skin called the areola.

Fat fills the spaces between lobules and ducts.

There are no muscles in the breast, but muscles lie under each breast and cover the ribs.

Each breast also contains blood vessels and vessels that carry lymph. The lymph vessels lead to small bean-shaped organs called lymph nodes. These lymph nodes are found in clusters under the arm, above the collarbone, and in the chest. They are also in many other parts of the body. 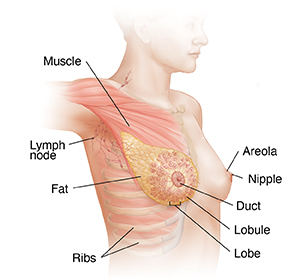